Bitcoin Cash is a peer to peer network, so the network code is very important both from a functional and security viewpoint.

The current incarnation of the network code (as of v24.0.0) is based on the general architecture set by the original Satoshi code in Bitcoin v0.1.0/v0.1.3 (Reference).

The rationale for this documentation is the assessment of the benefits and impact of changing the general architecture with one that is more parallel (wrt peer communication). In the current implementation, the receiving network thread "commands" the rest of the application; moreover, only one incoming message at a time can be processed. Re-engineering this part of the application can have important performance improvements. No specific recommendations will be proposed in this report.

The application has a globally scoped std::unique_ptr<CConnman> g_connman which, besides managing connections, as the name suggests, manages most of the aspects of networking. It is started as the last step of initialization, after all other subsystems have are running. In doing so, the initialization thread essentially passes the control of the application to the network threads.

A CNode represents a node/peer, and it contains all of the information regarding the connection to that peer, including current network-level data buffers and application-level network CNetMessages. g_connmanmaintains a vector of CNodes/connected peers.

Starting the CConnman will start the following threads:

There is a level of decoupling here in that the net thread writes to the CNodes' vProcessMsg message list and reads from the CNodes' vSendMsg message deque, while the msghand thread does the contrary, and they work in parallel. One is a list and the other is a deque because of API requirements (specifically, deque lacks splice() used in the code).

The net thread is a straightforward read/write loop for network sockets and for each iteration it:

The msghand thread is a loop for application-level messages and it:

The PeerLogicValidation::ProcessMessages and ProcessMessage functions are really complex. They have a big part of the p2p functionality and application logic.

Each CNode has a Poisson delay set for sending invs to it. When this delay expires for one node, all of the nodes will be processed again.

The addcon thread opens connections to peers specified with the addnode command line parameter and RPC command. Nodes added using addnode (or -connect) are protected from DoS disconnection and are not required to be full nodes as other outbound peers are.

The opencon thread will do two different things if the -connect parameter is specified. If it's specified, it will enter a loop that will connect to the specified IPs, and any further IPs specified with the addnode RPC command; exiting the loop will terminate the thread. Otherwise, it will enter into "normal operation" mode, which has an outer loop which finds seed nodes, calculates nodes to try, and an inner loop that will find one valid connectable address; after that, the outer loop will finish with a connection attempt to that address.

The net and msghand threads work in parallel, neatly separating the processing of network-level streams and application-level messages. Looking at the details of the msghand thread, it is evident that the processing of received messages is essentially single-threaded. This includes mempool admissions of transactions, block validation, or the ability to serve simple peer queries (e.g., GETDATA) while the processing of another message is running.

The benefits could possibly be:

bitcoind is a peer-to-peer application, so the network processing is central to both functionality and security. Reworking the architecture of these central aspects comes with a set of costs and risks:

Depending on how we want to go about it, all known and anticipated DoS vectors would need to be protected from with either:

There is always the possibility of introduction of a DoS vector that is both unknown and unanticipated, though.

Moreover, there is always the possibility of introducing programming errors, especially in a big refactor. There are precedents for this, and the reputation hits this could lead to are quite important. This is very important, especially while the Bitcoin Cash Node software remains, to the best of my knowledge, the main node used for mining, and needs to be rock-solid reliable as it has always been.

There is distinct but related architectural concern that will also need to be addressed to fully take advantage of an architectural rework: fine-grained locking. The net part of the current implementation relays on a multitude of fine locks for synchronization; on the other hand, the msghand/processing part grossly uses a single big lock (cs_main) most of the time. Even if we do parallelize the message processing, we would see little benefit without also implementing finer grained locks around it. The impact of doing so is out of the scope of the current report.

A CSubNet (in netaddress.h) has a CNetAddr and a netmask. It's used by the BanMan (in banman.h), via CBanDB, and also other parts of the application, like the http server

The netbase.h file has a number of functions for basic networking.

A CNetMessage (in net.h) contains partial or complete messages. While data is being received, the message can be left partial, until the next read. A complete message has a CMessageHeader and the CDataStream.

A CNode (in net.h) represents information about a network peer. It has a CAddress and data structures for exchange of messages and raw data.

A CConnman (in net.h) manages the connections to peers. It has a vector of CNode pointers, and methods to connect, disconnect and otherwise manage connections and peers. 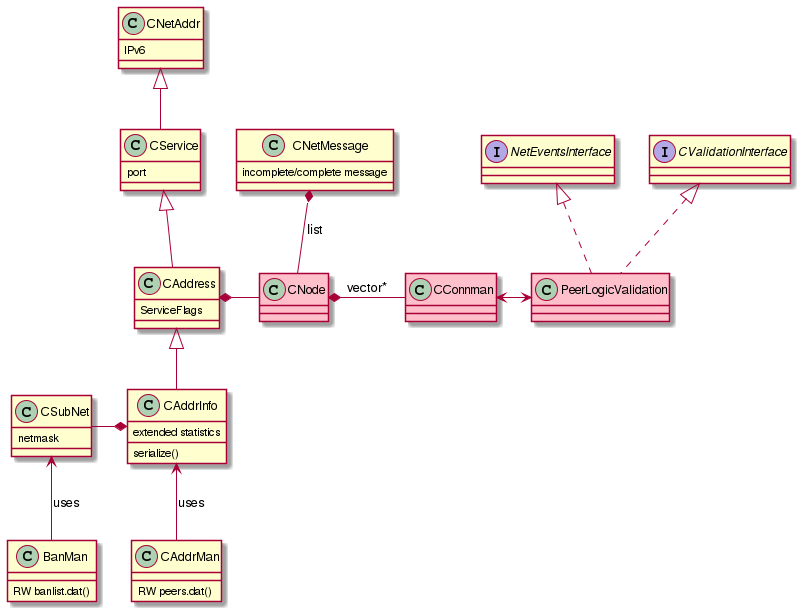 The above image presents the relevant classes and their interactions. The most important are figured in pink.